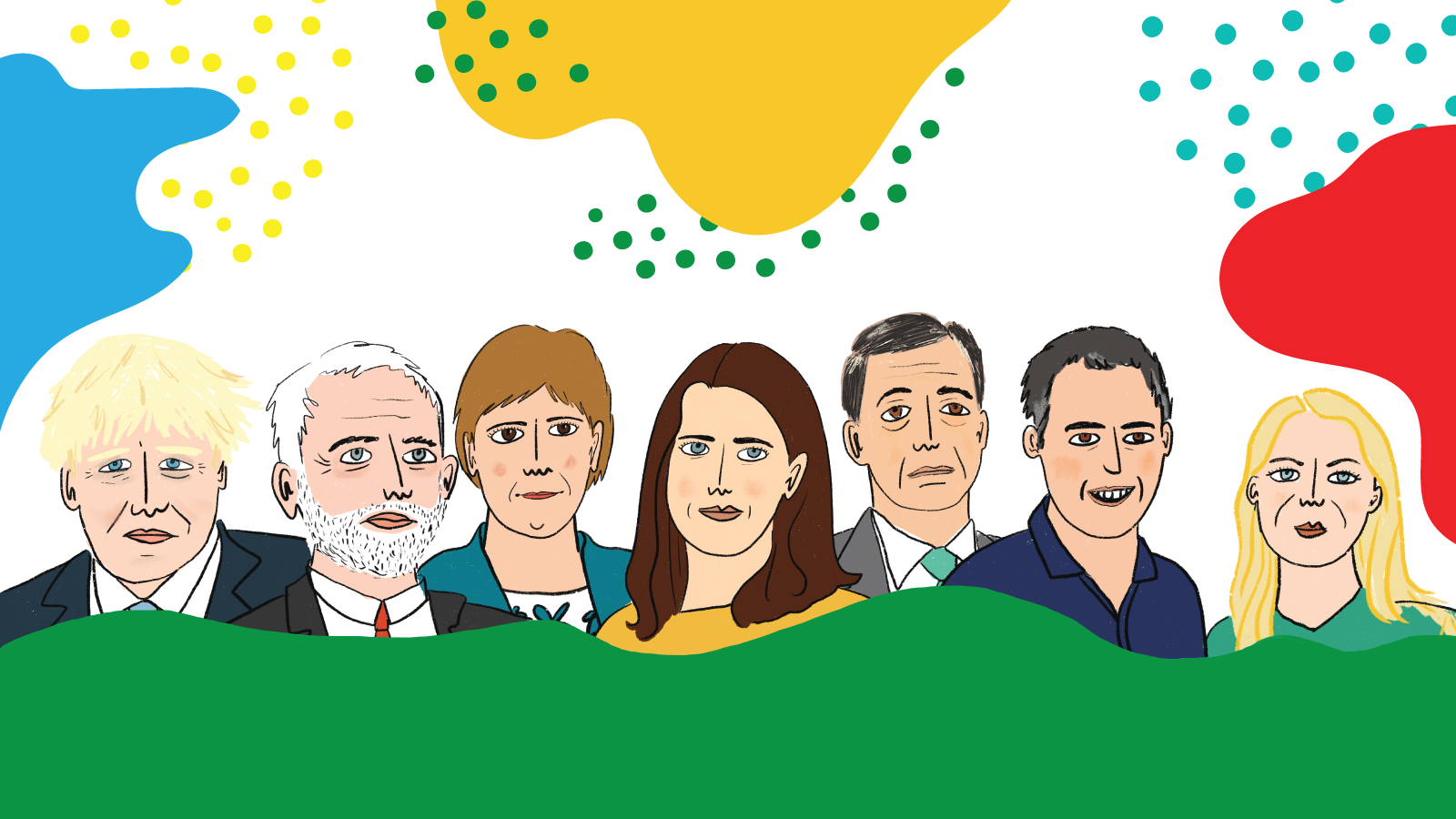 For the past four weeks the team at Acumen have been probing public opinion throughout the UK with a string of surveys to coincide with the upcoming General Election. The surveys, which were sent out to a database of over 110,000 market research participants courtesy of the team at Research Opinions, quizzed the British people about their views on everything from the prospective leaders, the party manifestos and the big issues facing the nation.

The surveys scrutinised two key areas of public attitude; how well each of the party leaders were perceived to be doing and which political party the public were intending to vote for. In addition to this we asked key questions on a range of issues which arose organically throughout the election cycle with each survey timed to gather responses at significant milestones over the past four weeks – such as the leaders debate and the release of the party manifestos.

Having access to such a large pool of potential participants from right across the UK gave us a significant advantage. Additionally, as the participants on the Research Opinions database have all opted in to participate in market research, it also meant we had a community who were engaged and willing to share their opinions. From this we were able to return results for a large sample of the population, from across the UK, and then track shifting attitudes towards the leaders and their parties as events unfolded throughout the election cycle.

The findings of our research showed an early lead for the Conservative party in the week following the announcement of a General Election, with the Conservatives proving to be more popular across the UK by 2-3{507235cd7bf177eea4c9d7ffa05443f1fb50bb3c683fc377ad5ed86dac05d456}. However, this lead seemed to plateau while Labour, who were initially trailing behind the incumbent government, began to increase their support with a steady upsurge in people stating their willingness to support Labour over successive surveys on 20th November, 27th November and 3rd December. This culminated in the Labour party taking a small lead over the Conservative party with 39{507235cd7bf177eea4c9d7ffa05443f1fb50bb3c683fc377ad5ed86dac05d456} of people stating their intention to vote for a Labour government and 36{507235cd7bf177eea4c9d7ffa05443f1fb50bb3c683fc377ad5ed86dac05d456} for the Tories. 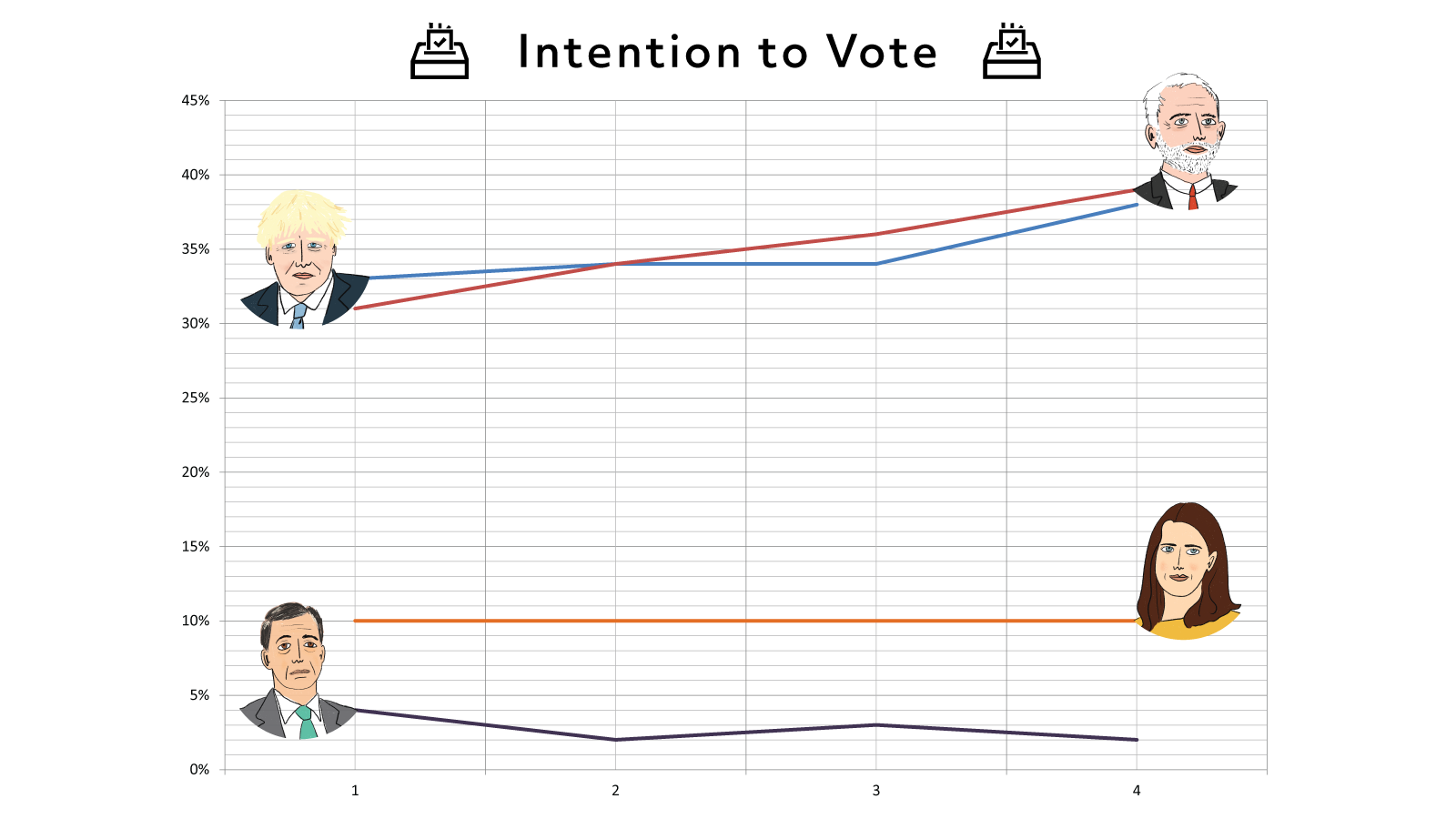 While this seems to contradict many other pre-existing or established polls, we have seen a more consistent voting intention with regards to both the Liberal Democrats and the Brexit Party; with the latter losing support, possibly due to the arrangement with the Conservatives not to contest specific seats. This might also be key to any possible interpretations of the data as it’s not just the Brexit Party who have discussed tactical voting tactics in specific constituencies. Labour, the Liberal Democrats and the Green Party have all spoken at local levels about the need to vote tactically in a bid to forestall a Tory win.

This idea of people potentially voting for their ‘least worst’ option may be at least partially substantiated by the results to another key question we tracked over the past 4 weeks. In addition to asking people about their voting intentions we also wanted to understand peoples’ perceptions of the leaders. The specific question we asked was to rate each leader’s performance in their role so far, with 4 graded options. 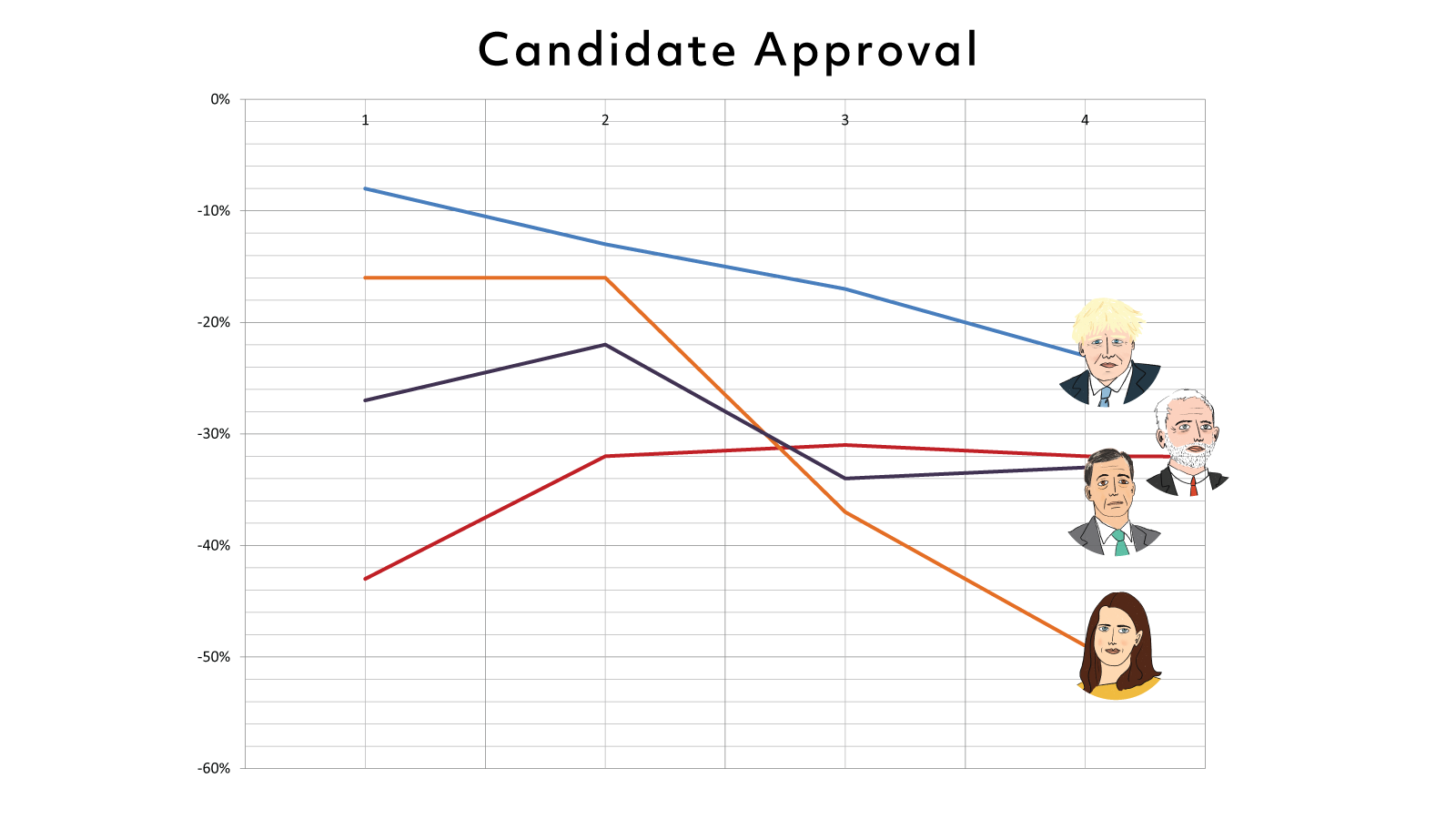 Taking all of the data together it paints a dim view of the leaders with Boris Johnson’s performance declining, but still maintaining, a lead. Jeremy Corbyn by contrast saw a minor increase in his performance rating but was still seen less favourably by the majority of the people we surveyed. Nigel Farage and Jo Swinson also received significant negative responses to the question of their performance. This, to some extent, could suggest a high level of apathy towards the potential leaders of the UK even among voters who have been highly engaged with the political process and the repeated surveys they’ve wanted to participate in.

There may be no surprises in any of these numbers for people who’ve been following the twists and turns of the General Election over the past four weeks, but it does seem to indicate that while people might be stating their broad support, perhaps one of the biggest obstacles facing each of the parties is that over their own leaders. How that materialises tomorrow in the voting booth remains to be seen. Some may set aside their personal dislike of the national candidates in favour of their stated party while others may choose to set aside party allegiance in order to secure a government which most closely reflects their political interests.

Is the end in sight?

It has been an intense period of debate with many unforeseeable moments both propelling and pulling down on the fortunes of all of the parties and their leaders. With 24 hours remaining there are still potential twists that could provide for a surprise ending but, from our perspective, it could also be something we’ve already seen before. 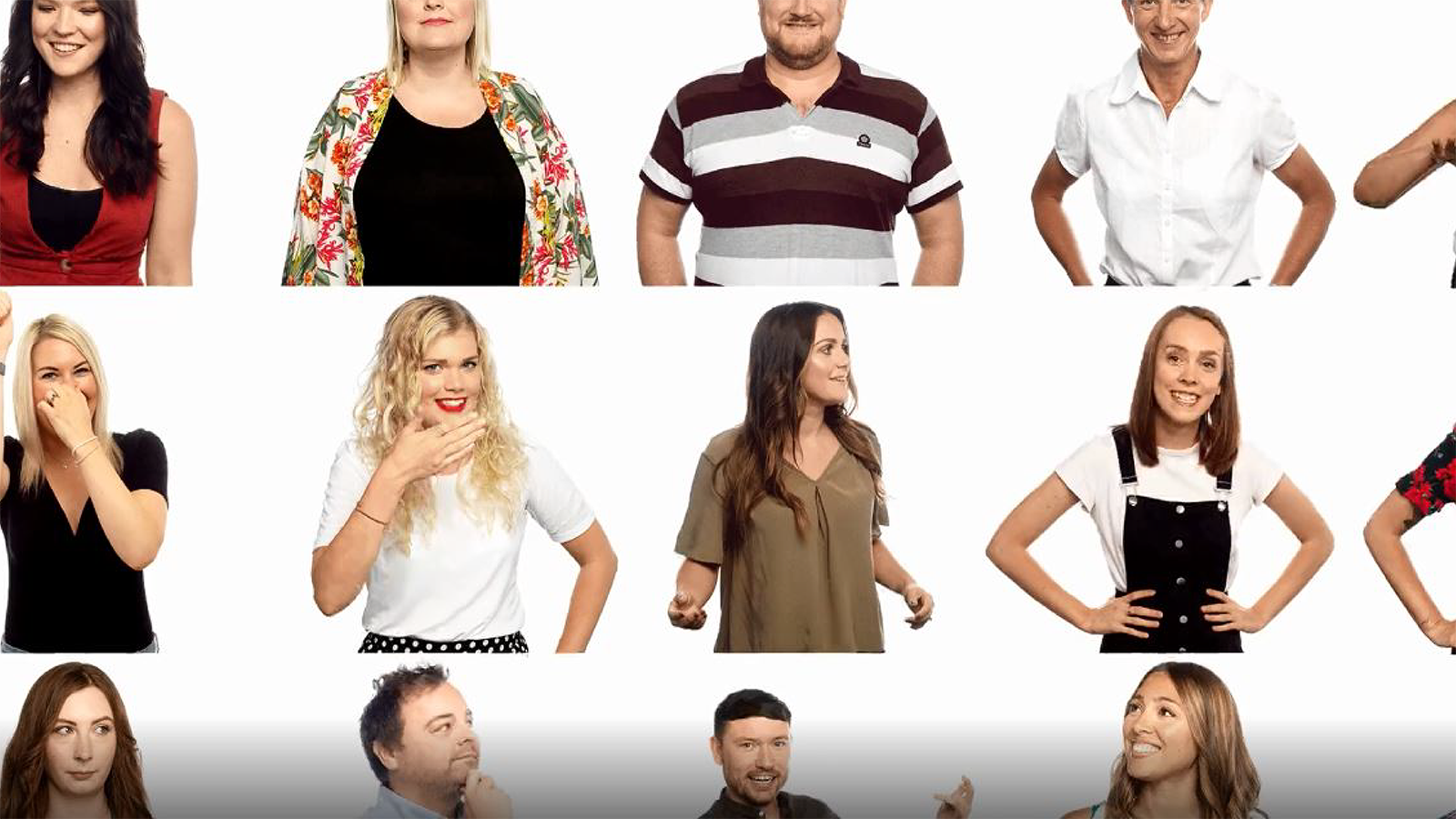 The Gif That Keeps on Giving 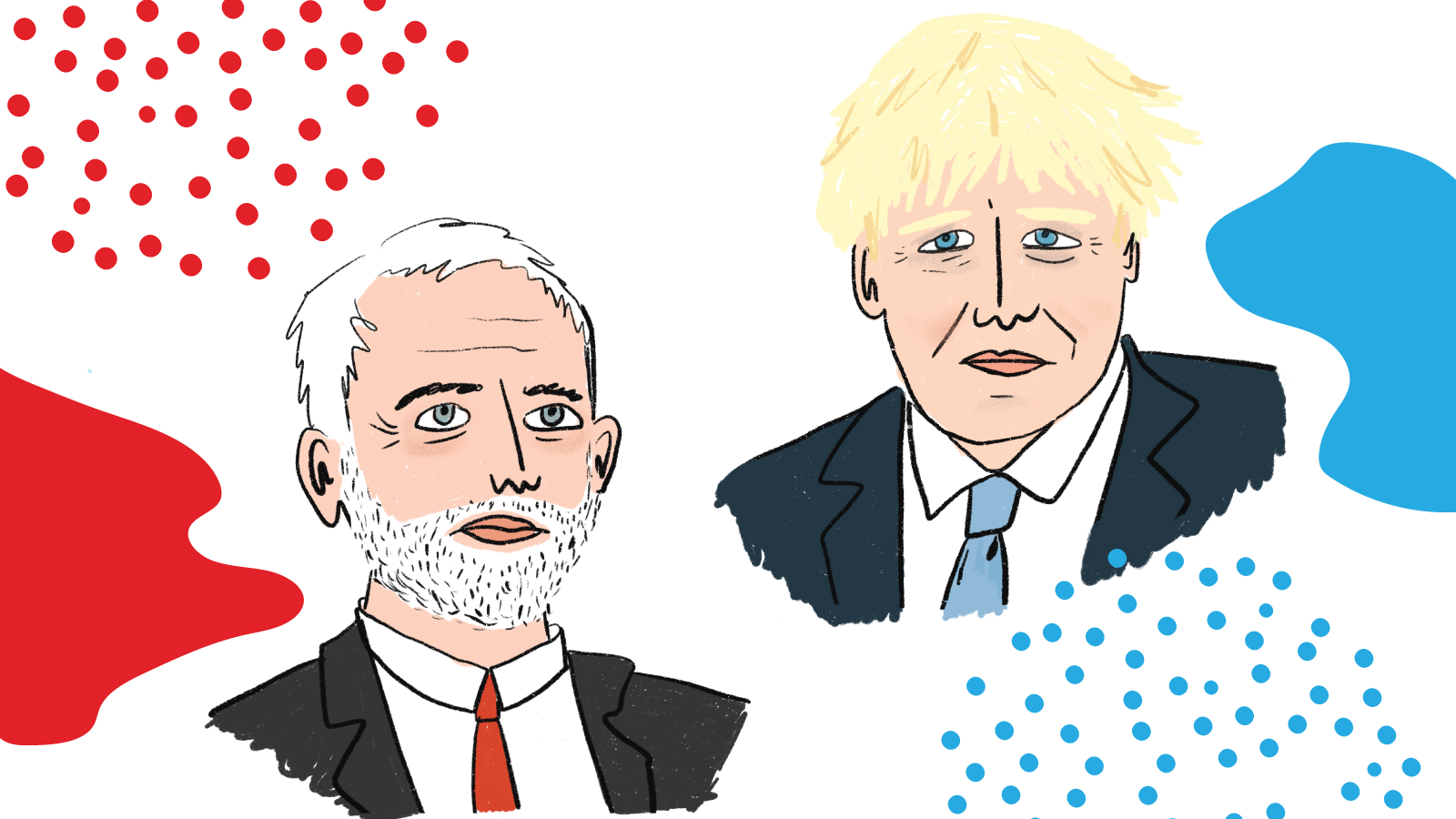 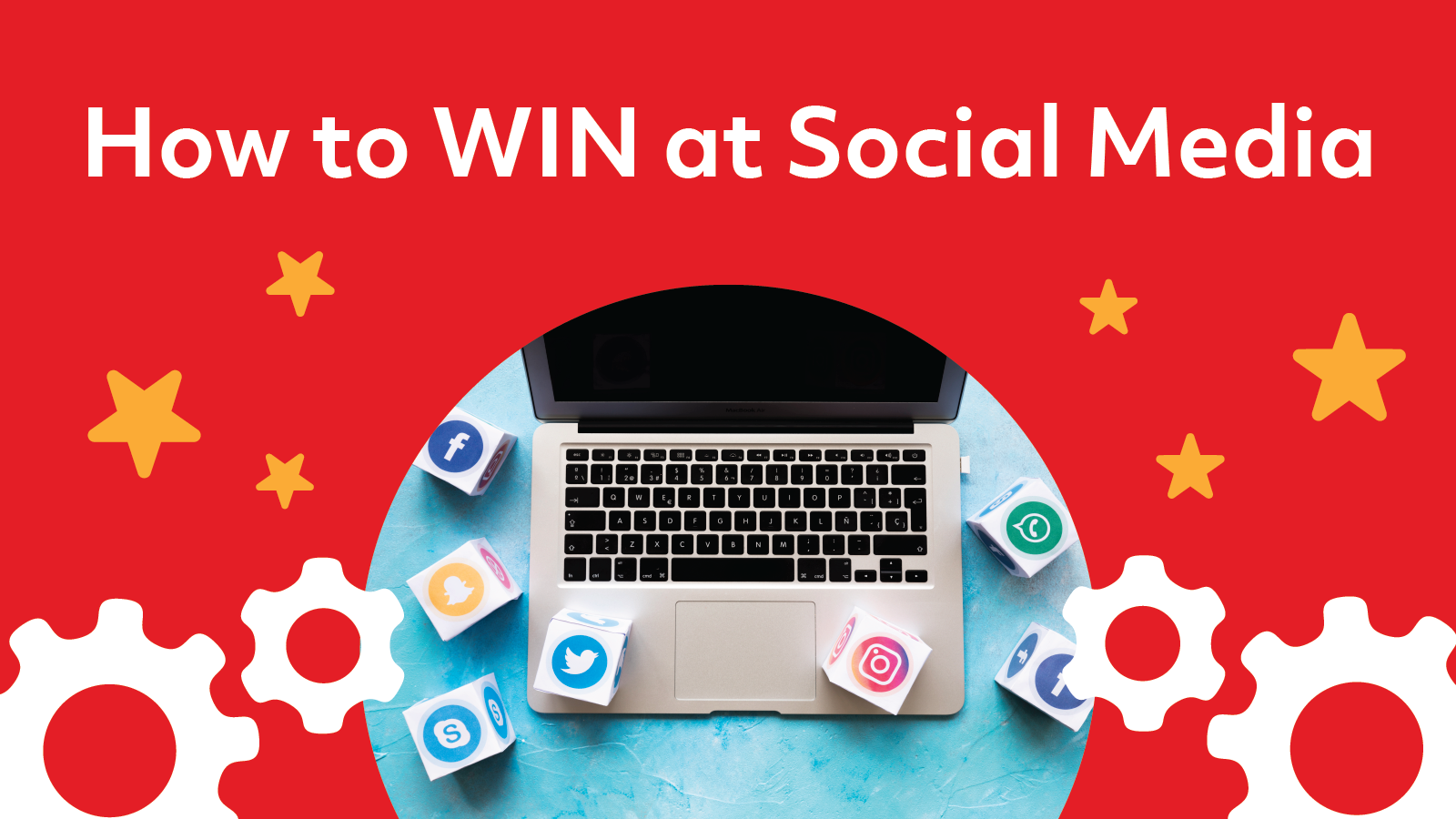 How to Win at Social Media